The workaround for this problem is to add a “Join Domain or Workgroup” step in the task sequence (which can be found in the “Add > General” menu in the task sequence editor window) after the “Setup Windows and Configuration Manager” step, and add a delay between the two steps. I added a two minute delay, but that might be overkill. After making this small modification to the task sequence, every single computer completed the second domain join step and therefore finished the rest of the task sequence successfully. Here is what it should look like: 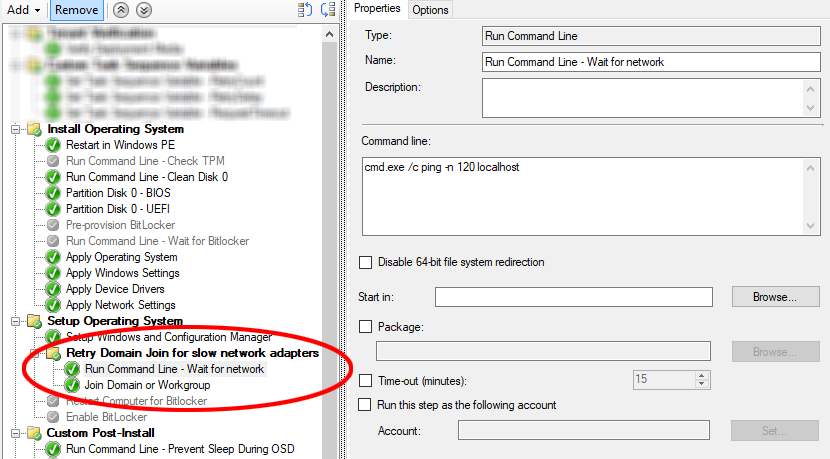 The “Join Domain or Workgroup” step will restart the computer to join the domain, so there’s no need to add a separate restart step after this.

If you’ve experienced a similar issue or have a different workaround, feel free to comment below.

Contrary to popular belief, Dell’s CCTK tools (now called Dell Command Configure) do not have to be injected into WinPE…

If you need to clear the SCCM client cache or increase the cache size on individual clients, there are a…

SCCM’s power configuration options allow setting a wakeup time for computers, but only for desktops. Currently SCCM has no option…

This site uses Akismet to reduce spam. Learn how your comment data is processed.